I used to think ADHD is fake. Or at least poorly defined.  One of my first memories of ADHD was a student research project in a class I taught as a new teacher.  This student’s assertion was that symptoms of ADHD in children were also the symptoms of being a child in the first place: not sitting still, having difficulty focusing on things that aren’t exciting, and so on. I tended to agree.  When I got my first letter about having to provide an accommodation to a student with a learning disability, I thought oh, great.  I was young and struggling anyway to keep up with my work as a teacher (with undiagnosed ADHD), and now I was having to provide this accommodation, to take class time and my personal time to recruit a note taker to a student who didn’t seem all that different from anyone else.  I’m not proud of that response, but I understand where it came from.

Back then, I did not consider that I could have ADHD for two reasons.  I thought it was a children’s disorder (with sketchy symptoms) and I thought having ADHD meant that you could not concentrate, and I had always read compulsively.  I just thought I was a brat because I didn’t like to do boring things or deal with thorny problems.

Working in an educational institution, I know that one reason people deny ADHD exists is that limited resources will be directed toward some people and away from others.  As a parent with two autistic kids in special education, I am keenly aware of the resources spent on my children while schools are being closed and programs cut. As a professor at a teaching institution (as opposed to a research institution), the overall focus is on trying to help all of our students learn and succeed, but there is backlash and resentment from some professors.  Someone put a quote on a wall once that said good students learn no matter what the teaching method. I’m not sure if that was an indictment of poor students, or a justification for laziness on the part of professors.

My kids get special, individualized attention, but my son’s entering kindergarten class had thirty kids to a room.  I am grateful for the resources, and, though I’ve never really experienced it, I would understand other parents’ frustration and jealousy. I’ve even heard some of the special ed staff gripe about the money spent on vocational ed. We’re lucky that the state of Michigan has stringent requirements for special ed (because it can’t be cut), but on the other hand, the staffing and facilities shift around more than a hyperactive toddler in an airport.

When resources are scarce, the claws come out.  Just witness the United States federal government when it works on budgets (if you don’t give in, why I’m just going to shut the whole thing down!).  Why do kids with ADHD deserve a break for their behavior and extra help and others don’t?

(Next: ADHD is un-American)

All my posts on ADHD “fakeness.” 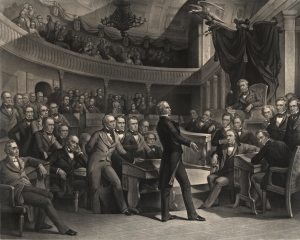 Kind sir, I beseech thee, take your Obamacare and shove it up your Teapot Dome.